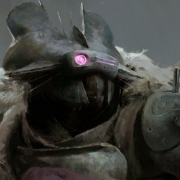 Now I haven't been on D2 until after Thursday's(?) update, so I don't know if this is a result of it. The rewards for the activity have brick-walled for me: Glimmer rewards trickle in on the update list one at a time. Picking up Glimmer from defeated enemies works as always. I don't see item rewards appearing at all until I'm well in orbit 30 seconds later. The real kicker: I keep activating the Wayfinder Trove, interaction disappears, it opens up, contents transmat away and... nothing. Much more unsettling is that it's not counting towards the weekly challenge. I've done Astral maybe five times now (finished a run before this post), opened the Trove all five times, and the tracker says 2/3. All of this, and the misleading Wayfinder's Voyage weekly in the Seasonal Challenges regarding "Taken with Bow kills" when it's actually Scorn, means that someone screwed up on your end, Bungie. Please get this taken care of ASAP. If anyone else has similar problems, feel free to add them below.
English
#Help #gameplay #activity #seasonal #bug #Rewards
Comment Reply Start Topic
Report