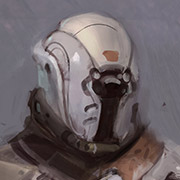 I have to just get this off my chest since no one seems to care other than me. Bungie lied to us. At least, a lot of us. There was a promise that the character you made all the way back in Destiny 1 would stay with you for the full length of the series. They kept this promise all the way up to Shadowkeep. When Beyond Light dropped, every player's voice was changed to either the Exo Male or Exo Female voices. However, unlike previous VA changes (namely Ghost) they never addressed it, and to my knowledge they still haven't. I honestly believed it was a bug until I played through Shadowkeep again with a friend and saw that they retconned my character and [url=https://www.youtube.com/watch?v=x_GOdjw7Gwo]destroyed the best cutscene in the game.[/url] If they wanted to use only two VAs for our guardians, they should've made this change in Forsaken, when our characters hadn't uttered a word for 3 years. Even in Shadowkeep, the Voice of Salvation has more lines than our character does, proving that our character's lack of lines are written to make us be a [i]"strong silent type"[/i], and not because the VAs are incapable of recording more than two sentences a year. In Beyond Light, our guardians spoke more than they ever have in Destiny's history, so much so that it was out of character. I, and many others, assumed the change in Beyond Light was due to Covid, and that in the Witch Queen they would get the full cast back again, especially since every cutscene predating the Witch Queen Campaign is non-repeatable without joining a new player, so the inconsistency would be ignorable. People argue that our guardians can speak more with fewer VAs, but now I never want to see my guardian's face or hear his voice again. He is no longer my character, he's an abomination that looks and sounds like a robot wearing human skin. Every time I see his face or hear his voice it takes away from the experience. I feel like I'm playing someone else's account. Exo players don't experience this betrayal because Bungie favored them over the rest of us.
English
#destiny2 #FeedbackD2 #light #voice #actors #beyond
Comment Reply Start Topic
Report